The pandemic has all of us on our fucking heels, it does.  Even if it didn’t cause you to lose your income, it either makes you limited to your residence (however limited in size, or not) or desperate for human contact and time outside, especially as the weather is becoming nicer.

We are extremely fortunate to be able to work from home, and although I have commandeered a big chunk of the dining room table while I do so (Wife Sublime has a dedicated office) we are still not aggravating each other to the point of this: 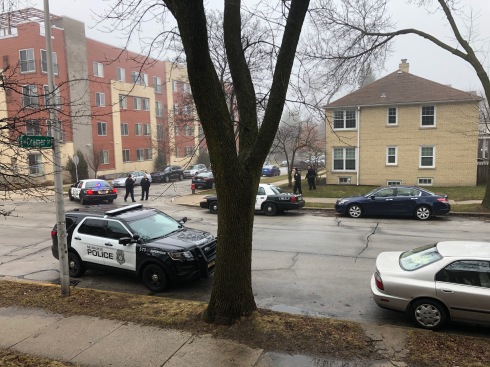 That was a guy up the block from us who had taken his wife hostage with a gun.  I fear this will become more and more common as time goes by, and close quarters create high tension, and there are far too many households with hard weaponry.

I am here to talk about music.

Our last concert was March 5, at the Pabst Theater. They Might Be Giants, and even then I was starting to be concerned about the large numbers of people.  It was however, a great show.

Not long after that, we were scheduled to go to Costa Rica on a tour, and two days before, the tour company canceled all trips.  I was a bit relieved, I admit, because while I was concerned about the travel environments of airports and airborne death tubes, I was more concerned that during our trip, Trump would lock us out.

Almost all of the ethnic festivals that happen in our summer are being canceled.

But the crowning jewel in our summer festival schedule, has been ostensibly rescheduled for several weekends in September  You and I, let’s just roll the fucking bones whether that happens or is canceled.

So, for the foreseeable future, this blog is likely to see nothing happening, no action below the belt, as Langford says during one episode of the weird as fuck tape Mekons New York.

It is very weird to look forward to no actual shows.  Some of my musicians are putting shows on from their living rooms basements, and totally vacant stages online.  I applaud them.  But it’s not good enough.

It will be a while, I guess, before I have better updates hereabouts.  But there is not real idea when that might be.

Comments Off on Retreat from Memphis | posted in Friday Musical Poop Shoot, General

It’s a beautiful sound, When my life comes crashin’ down, That ain’t so obvious

Well, let’s start the new tradition by resurrecting an old one.  Here’s the Friday Musical Poop Shoot, or Spew, or whatever.  Getcha self a nice drink (and one for me while you’re at it, thankyew) and let’s get nutty about the nutty nutty sounds!

I don’t have much in the way of rules.  I have long since ever been embarrassed by anything I listen to, so if something crappy or cheesy or just plain awful comes up, I hardly ever take a mulligan.  I don’t even strictly stay within 10, or 11, or whatever number the other kids do, because I am a rebel, Dotty.

1.  The Carolina Chocolate Drops, Political World.  Cover of a Dylan tune by a bluegrassy band, from the Amnesty International tribute album.  I watched the Dylan biopic “I’m Not Here” on a whim, basically.  And it really kind of blew me away.  The six-part structure, combines with the different interpretations from teh different actors, and the musicians chosen to do cover versions all worked to create a complex interwoven movie that really forces you to view Dylan from a different point of view.  Doesn’t really matter what point of view you bring to it, you wind up gaining a new one.  It’s kind of remarkable, really.  –Don’t get me wrong, I have not become all hippy-dippy folky-wolky Dylan nutjob, but I have a different appreciation for his work now.  But it says something that for the most part, I prefer the cover versions.

2.  Dinosaur Jr, Outside.  Free So Free.  Nice to see J returning to form and putting that squall back to work. Also, it is worth mentioning that I have brain-cubes in my drink.

3.  Gear Daddies, Wear Your Crown.  Martin Zellar’s former band, from MPLS via Austin.  Awesome alt-cowpunk americana, whatever you want to call it.  This video doesn’t nearly justice to the versions with the full band; the rhythm section puts a punch in it.

4.  Colin Hay, Maggie.  Yes, the guy from Men At Work.  If you have blown off his solo work because  MTV, you’re missing out.  Saw him at Summerfest a couple of years back, and he was so good.  He had a song (and cameo) on Scrubs that was superb.  As a Guy with a Guitar, he’s way above average, mainly because his songs are so good.  But boy, his guitar in this video is SO TINY.

When I was in high school, I had a crush on a friend, her name was Mary Margaret.  Perhaps if I had called her Maggie…

5. The Kissers, Muirsheen Durkin.  Local Irish punks, obviously.  The name is a reference to The Pogues.  Obviously.  They’re from Madison, although I haven’t seen ’em around lately.  Wonder if they’re still active?  Ahh.  Apparently so.  You know, the Internibbles are like meth for music crazies like me.

Here they are doing some song I’ve never heard before.

6. Martin Newell, Goodbye Dreaming Fields.  Like a mix of teh Move and XTC.  How could I NOT like it?  I am kind of glad BBBB doesn’t come around here, he would probably just say he saw this guy open for Robyn Hitchcock at teh Bell House. Meanwhile, he obstinately refuses to see all the Mekons-related music that is in his vicinity.  Not to mention the Milwaukee bands.  Bastard.

7.  Goo Goo Dolls, Naked.  I was introduced to this band with the album “SuperStarCarWash” which was just stellar, and still had a punk roughness around the edges, while allowing the tunefulness of the songs to shine through. On this album, the band was having those rough edges filed down (although we saw them a couple of times live, and let me tell you they don’t bother with gloss when they are playing). Eventually, they discovered that they could write ballads like NOBODY’S business and that it made tons of money, so that’s the way they went.

But before that, they proved that they learned the lessons of Tim oh so well, and proved it by writing the best Replacements song Paule Westerberg never wrote (well, not actually, he co-wrote it, but you get what I mean):

Fuck but that is a great song.

7.5 Goo Goo Dolls, Black Balloon.  As if to prove what I said, iTunes offers up the punk-ballad next.  Compare and Contrast, you will be graded by how closely you agree with me:

8. Glossary, These City Lights Shine.  More of this americana rock and roll midwestern cowpunk. Although these guys are from Tennessee.  Saw them on a multi band bill, with Brent Best’s band, in a little local hall.  All four bands got together at the end to play “Born To Run” and we had seen Springsteen recently and I have to tell you, seeing a bunch of hard working musicians in a sweaty club playing that song for all their worth, well, Springsteen would have knelt down. I suspect OBS will like this band.

This song isn’t on you tube, try this one:

9. Liz Phair, Mesmerizing.  Still one of the best punk, or rock, or alternative albums of the 90s.  It is unusual that I’ve never seen her live.  She is pretty much the anti-Jewel.

10. Bob Marley, Get Up, Stand Up.   The biography Marley is stellar.

Everything fades to black….

12. The Clean, Ludwig.  I dunno, I guess this is some Australian band….

13.  Jimmy Cliff, Hurricane Hattie.  Perhaps M. Bouffant might respect me more if he knew this was in my Liberry.  Probably not.  But that’s the way it goes, you know?  Jimmy Cliff’s most recent album was produced by Tim Armstrong of Rancid, and the chemistry resulted in some truly stellar work.

14.  The Gaslight Anthem, God’s Gonna Cut You Down.  This band is rapidly becoming one of my all-time favorites.  We have had a party in late summer since forever, it was originally kind of an anniversary party and then it became a house warming party, then just an annual thing.  This year, we have to balance the Moving of The College Kid, with the normal cleaning and other party prep, in addition The Gaslight Anthem is playing at Harley Fest on Friday. So we are adjusting the weekend schedule to accommodate, but basically, i will be exhausted no matter what.  Here’s the Anthem playing “The ’59 Sound” with some slob.

Of interest, is that the electric guitar that I sold in order to stay in college was pretty much the same one that BS plays; 50’s era Gibson flat body.

Sweet living fuck, I miss that guitar, as mutilated as it was.  The older I get, the more convinced I am that it was a mistake to sell it.

15. The Toasters, Dub 56.  Saw them at a local pub, one that didn’t normally have music.  It was weird.  We got there early and I spilled a pitcher of beer (it was the goddam table!) before the band even started.

16.  The Squares, Ways To Be Weird.  When I moved to Milwaukee, the Femmes were just arcing up.  The BoDeans started not long after.  There were so many good bands, we say them every weekend at all the East Side clubs.  The local music scene was so good, that a bunch of guys in this band moved from Indianapolis to be part of a thriving scene.  This was one of their vinyl releases, which I dug out and digitized last year.  We used to see these guys all the time around town, eventually they splintered into several other bands… Now, the two brothers are DBA as The Wooldridge Brothers, one in Milwaukee and one in MPLS.  They are worth your time if you get a chance to see them (I am pointing that comment at YOU Snag) and if not, their albums are well worth the download.  I cannot stress this enough.